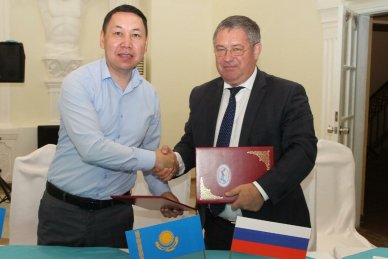 Neighborhood partnership of the West Kazakhstan region with Orenburg brings new projects, joint activities, and concrete results. There are plenty of examples of successful integration in the history of cross-border cooperation.

The delegation from Orenburg arrived in Uralsk on June 6. This year the parties discussed new ways of joint work at a meeting. The result of the meeting was the signing of two memoranda of cooperation between the Kazakh-Russian enterprises. The memorandum on cooperation between the Chamber of Entrepreneurs of the West Kazakhstan region and the Chamber of Commerce and Industry of the Orenburg region is especially important because it affects the interests of the entire business community of the border regions. Cooperating in the field of protection of the rights and lawful interests of subjects of business, the parties will carry out monitoring in this direction, to an exchange of the information on the infringed rights of the businessmen operating in the territory of cooperation. These facts will be immediately brought to the attention of higher authorities by the ombudsmen for the protection of the rights of business entities.

Seven business entities had a reception of the Ombudsman on the protection of the rights of businessmen within the framework of the above-stated memorandum.

During the current year the business ombudsman of the region received about 10 oral and written appeals from entrepreneurs, the parties decided to hold another meeting, which was held in the Orenburg region of Russia.

The next step in the development of business relations arising from previous discussions was the quest session "From cross-border cooperation to Eurasian integration", organized on June 28 by the Ombudsman for the Protection of Entrepreneurs' Rights of the Orenburg Region in the territory of the Pervomai district municipality.

On the Russian side, representatives of the legal block of the Chamber of Entrepreneurs of WKR and business representatives also took part in the question and answer session. They discussed problems related to administrative barriers to foreign economic activity.

The purpose of the event was to identify administrative restrictions and barriers in the border area, improve their legal literacy, and provide assistance in legal support and information support for businesses.

The organizers of the quest-session invited senior officials of the government agencies, including representatives of the Ministry of Internal Affairs, road supervision, Rosselkhoznadzor, customs, economic development, industrial policy and trade, veterinary medicine and agriculture, prosecutors and entrepreneurs of the Orenburg region.

The meeting was held in a positive manner. There was an active exchange of views and suggestions during the quest-session.

Following the results of the meeting, it was decided to further develop international cooperation within the framework of the execution of the previously concluded memorandum on cooperation between the ombudsmen for the Protection of Entrepreneurs' Rights of the Orenburg and West Kazakhstan regions. The parties decided to meet in the quest session format.