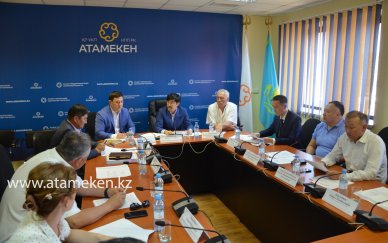 Since last year, the local poultry farm has not been able to receive the subsidies it was entitled, while the regional agricultural administration, according to the results of the same year, returned untapped 800 million tenge to the republican budget, atameken.kz reports.

The problem of poultry farmers in the region related to the receipt of subsidies has been considered at the next meeting of the Council for Protection of Rights of Entrepreneurs and Anti-Corruption. Almaly kus and Bakai kus poultry farms submitted complaints to the Regional Chamber of Entrepreneurs.

According to deputy director of Almaly kus LLP Roza Eresheva, last June they applied for subsidies to cover the company's investment costs, but they have only been paid a small part of their funds.

“The first time we handed over the documents in June, then we re-submitted in August and November. The act of inspecting of our equipment took about one month, then they said that changes in the rules of subsidizing are expected and asked to wait

Director of Bakai Kus Baktygul Ubisheva said that their enterprise is also facing difficulties. Their expenses are much higher than revenues, and they received last subsidies in 2015.

“To get subsidies, we must have a sorting machine. It is very expensive equipment, at the moment we cannot afford it. Now our poultry farm produces 40 thousand eggs per day, and the above equipment operates at a capacity of 200 thousand eggs per day. We ask this requirement be removed to help such small businesses as Bakai kus. In March, due to several objective reasons, our productivity dropped to 30 percent, now we managed to increase it only to 55-60%,” Baktygul Ubisheva said.

“Both enterprises are socially significant for the region. Bakai kus in its appeal asks us to provide for the possibility of allocating quotas for the purchase of feed. We wrote a corresponding letter to the Ministry of Agriculture. They also ask to make restrictions on the delivery of low-quality expired products from Russia, we would like the responsible authorities to pay attention to this. And, thirdly, we support the proposal to remove the rule on availability of a sorting machine for subsidies payment. As for the company Almaly kus, their investment costs, in total, amounted to 180 million tenge. With these funds, they purchased equipment and commissioned additional poultry houses and a feed workshop. To date, the poultry farm received subsidies only in the amount of 37 million tenge. Meanwhile, in 2018 the amount of 1.2 billion tenge was provided for the payment of subsidies in the local budget, 800 million of which was returned to the republican budget at the end of the year because of non-development,” deputy director for Agro-Industrial Complex of the Chamber of Entrepreneurs of Atyrau region Serik Sarsekenov said.

The head of the regional department of agriculture Kairat Nurlybayev tried to clarify the situation.

“As I know, the Almaly kus is asking for subsidies for equipment that was acquired several years ago. There are specific deadlines in the rules. In this connection, they were denied subsidies. We will wait for the results of the audit and try to solve the problems of entrepreneurs,” he said.

"At the moment we have a second appeal from Almaly kus. Today we have begun to check this situation if it is confirmed, we will give a strict legal assessment. It is necessary to wait for the results of the audit, then, the entrepreneur can go to court. In turn, we promise to support the entrepreneur within the framework of the law,” Toktamys Zhumagulov said.

“We, for our part, conducted a legal analysis of the situation. 800 million tenge were returned to the budget, while our farms needed this money. I would like to note that the entrepreneur needs to wait for the results of the inspection and if necessary to go to court, the regional Chamber is ready to provide the necessary support,” Sarsenbay Zholdybaev, head of the regional office of Ombudsman for the Protection of the rights of Entrepreneurs of RK, deputy director of Chamber of Entrepreneurs of the Atyrau region, said.

In conclusion, Abdolla Idresov, director of the Chamber of Entrepreneurs of the Atyrau region, noted that today over 100 applications from farmers needed feedback on the issue of receiving subsidies.