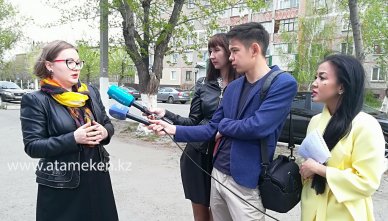 Today domestic business has actively been enlarging borders of cooperation. Northern Kazakhstani entrepreneurs working with Russian colleagues are no exception. Consequently the question now arises of protection of business interests beyond the country. The perfect tool in such events is business ombudsman institution.

"In last fall, the first business forum of business rights commissioners of Kazakhstan and Russian was held. There, problem issues both of Kazakhstani and Russian business were discussed and the result thereof was entering into agreement on cooperation and detection of those problem issues which are preventing business development", - Deputy Director of the Chamber of Entrepreneurs of NKR on legal issues Zhenis Kaziyev says.

At that he notes that the agreement entered into is are yielding its results. Thus, as of today rights of two Northern Kazakhstani entrepreneurs have already been protected with assistance of Russian and Kazakhstani business ombudsmen.

"In last May, IE Burykina Yu.S. addressed to us. Her company specializes on sales of sports goods. She purchased goods in Russia and it disappeared on the way. Urgent measures were required, for this reason we address to the ombudsman of the Russian Federation Boris Titov requesting to render assistance in solving this issue. Also, we quickly got into touch with ombudsmen of Mari El and Pskov region. In November, the issue was solved. The identity of the thieves was established, the court succeeded, the sentence was delivered. The part of damage was recovered at once to the entrepreneur and currently the issue on the remaining amount is being solved. We keep this issue under our control. This year, we have two more addresses and we involved Russian business ombudsmen to solve them. One of them has already been solved, the second one is under our control:, - Zhenis Kaziyev keeps on his speech.

For the record, the businessmen themselves say about importance of such cooperation. According to the manager of IE Burykina Yu.S. Yulia Dubina when they became aware of the theft of the goods purchased, they address to law enforcement authorities in Russia, but the investigation was expressly protracting. The process made progress following the address to the Chamber and involvement of business rights commissioners of both countries to solve this issue.

"We have been working at the sports goods market since 2006. During these years we have gained great experience, rearranged cooperation directly with exerciser and sports facilities producers. Last year, our company faced serious incident. A large batch of products ordered by us was dispatched from the plant of our Russian partner - bike producer, but on its way it disappeared in full. This impacted our business image and our company's wallet. Following the theft we addressed to the law enforcement authorities in the Russian Federation, however, the investigation was expressly protracting. We had to seek help from the Chamber of Entrepreneurs and business rights commissioner of Kazakhstan asking to render assistance in solving the problem and attracting attention to this case. The employees of the Chamber and business ombudsman immediately responded to our address and got in touch with their colleagues in the Russian Federation, - Manager of IE Burykina Yu.S. Yulia Dubina says.

Thanks to cooperated efforts of the business ombudsmen, employees of the chamber and law enforcement authorities the individual entrepreneur's rights were protected.