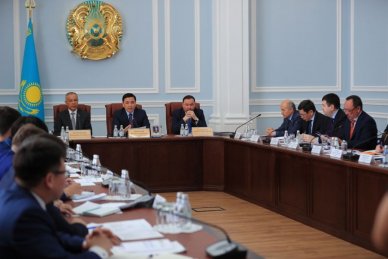 This year the institution of business ombudsman celebrates 2 years.About its activity in the interview we were told by the deputy on legal issues of the West Kazakhstan chamber of entrepreneurs, Nurzhan Maksotov.

It needs to be said that his first visit as business ombudsman, Bolat Palymbetov made to the West Kazakhstan region. The main goal was to meet with the regional business community. The entrepreneurs raised hot issues that became their hassle.

“The entrepreneurs raised the question of transparency of land parcels provision at the auction. This problem happened because in 2015-1016 local authorities didn’t hold any auctions. As a result of the meeting, the chamber with the local administration of Uralsk approved a detailed plan on transparency of land parcels provision”- said Nurzhan Maksotov.

The plan was aimed at provision of online information about free land parcels and information on tenders, competitions.

Nowadays at the site of the department of land relations of West Kazakhstan it was created a special section “For entrepreneurs”, where there is information on general plans, land parcels provided, information on tenders, competitions and auctions of land plots (www.zhkb-bko.gov.kz).

As a result in 2017 there were 2 auctions on 13 hectares land parcel of agricultural use, a total of 0,784 hectares and 1 competition on a land parcel a total of 48386,5 hectares. 31 January 2018 it was the auction of 5 land parcels for the construction of commercial buildings a total of 0,4 hectares. Today this work is fulfilled in systematic way.

The deputy of the regional chamber said that, the entrepreneurs also initiated the question of passenger services subsidy and increasing tariffs.

“Business Ombudsman also helped us with these. 27 June 2017 at the session of Uralsk local administration was approved a new fare tariff at the rate of 80 tenge –said Nurzhan Maksotov. Another problem that caused mixed feelings among the entrepreneurs was enforcement of court decisions on collection of debts from the organizations in favour of business. Businessmen asked of assistance in the in the enforcement of court decisions where the total of debts is 40000000. The duration of the court execution was 1-1,5 year. Executors took the measures- seizure of property, debtor’s current accounts arrest, ban of registration etc. Nevertheless, the measures of seized property realization were not taken.  This issue was also considered at the ombudsman level. After the intervention in this process by early 2017 outstanding compensation was paid”.

“Nevertheless, as Bolat Palymbetov said “There are a lot of issues that need to be solved immediately on the grounds”. So we aimed at the issues of regional character to find their positive decision. We are sure that the business ombudsman office will further defend the rights of the business community”- said Nurzhan Maksotov.