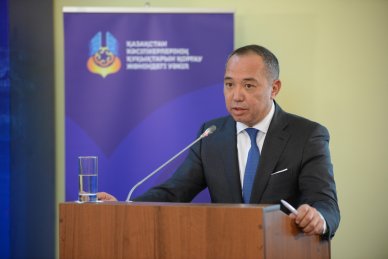 According to the Law "On the National Chamber of Entrepreneurs of RK", the activity of the Business Ombudsman is administered by the National Chamber. The office is made up of employees of “Atameken”, public figures, famous lawyers - more than 300 highly qualified specialists.

"In total over the period of the Business Ombudsman's work, more than 10 100 appeals have been received. The greatest number of complaints comes on issues of taxes, land relations, construction and procurement. Over 41% of appeals were resolved positively, the total amount of protected rights was more than 65.3 billion KZT. All problems we collect and publish in the public domain in the Registry of problems. In total, during the existence of “Atameken”, we identified 540 such problems, 351 of which or 65% were resolved", - Rustam Zhursunov noted.

Also, the head of the Office of the Ombudsman for the Protection of the Rights of Entrepreneurs noted that this year sociological surveys were carried out for reasons of corruption in five sectors - taxes, customs, land, construction and procurement.

"In order to humanize the legislation, large-scale work has been carried out to reduce the administrative burden on business. Within the framework of the bill more than 75 conceptual proposals of the National Chamber were adopted, but a number of painful questions for entrepreneurs remained. For example, confiscation due to customs violations, creates significant problems for business. We consider it necessary to resolve this issue as soon as possible, which is completely correlated with the Address of the Head of State on the protection of property rights. At the end of 2016, an amnesty was carried out on our initiative, including more than 400 businessmen were released on economic crimes", - Rustam Zhursunov stressed.

Together with the General Prosecutor's Office, work was carried out to humanize the criminal legislation.

"As for the relations of bona fide entrepreneurs with the nude companies, the work has to be done within the framework of the Tax Code. We do not want to act as a collective lawyer. But if the business fully pays all taxes, then the exemption from fines and penalties, in our opinion, will be fair. The issue of strengthening the responsibility of officials deserves special attention", - the speaker added. Rustam Zhursunov added that the practice shows that these people are not actually responsible for illegal interference in business affairs.

"We have proposed significant changes that are under consideration in the Agency for Civil Service Affairs. In general, the results of the work of the business ombudsman would have been impossible without the constructive position and support of the Government and all state bodies", - Zhursunov summed up.