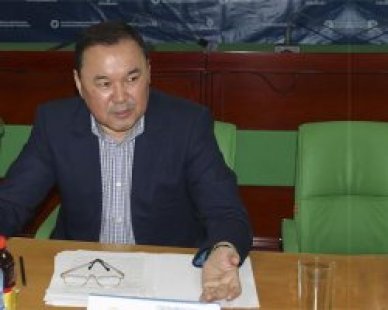 Business Ombudsman went to the regional center to meet with entrepreneurs. Bolat Palymbetov, the Ombudsman for the Protection of the Rights of Entrepreneurs of Kazakhstan, held a visiting reception of entrepreneurs in the Ili district of the Almaty region.

In the village of Otegen batyr, he met with entrepreneurs and heard their complaints and suggestions.

The Ili district is one of the largest industrial and densely populated regions.

Entrepreneurs from nearby Enbekshikazakh, Karasai, and Talgar districts also queued up for a meeting with him.

Bolat Palymbetov informed businessmen on the results of Atameken's work and the Office of the Commissioner for the Protection of the Rights of Entrepreneurs.

"In all regions, I travel to places and personally meet with the business community. It is important for me that the entrepreneur himself or herself expresses this or that problem. Therefore, I conduct personal receptions, where everyone can register, there are no restrictions or filters. As part of my visit to the Almaty region, I decided to go to the regional center and learn first-hand about the state of regional business", - the Ombudsman said.

According to Bolat Palymbetov, last year he received about 2 thousand entrepreneurs across Kazakhstan at the reception.

"Almaty region is the eighth region where I was this year and I am convinced that most of the problems are of local importance. I am glad that the issues of the republican level are being reduced, complaints on pseudo-enterprises and other criminal cases have been considerably reduced. All this says that the measures we have taken are working and we are moving in the right direction", - Bolat Palymbetov summed up.

During the reception of entrepreneurs, the business ombudsman voiced the problems of private preschool organizations.

A member of the Regional Council, director of the Kazakhstani Association of Preschool Education Kulyanda Batyrbekova spoke about the problems when placing the state educational order, approving the amount of per capita financing.

It should be noted that a number of private organizations addressed a similar problem to the Business Ombudsman at a personal reception in Taldykorgan.

Bolat Palymbetov said that today's situation with private preschool organizations requires an immediate response. Therefore, there will be monitoring of problems in the sphere of preschool education in all region of Kazakhstan.

The director of SP "Abishev ES" Erkin Abishev addressed with the problem in the sphere of land relations. The entrepreneur said that for several years he can’t change the purpose of the land for the implementation of the project "Construction of the cottage town "Satti Bolash" with elements of social infrastructure" in the Ili district. The entrepreneur in private ownership has a land area of 47,400 hectares for farming. However, today, the local executive body has refused to change the purpose of the land plot.

According to him, the akimat refers to the Land Code, where on land plots for farming, construction of objects not related to agriculture, including residential houses (including individual houses) is not allowed.

I would like to note that the implementation of the above project requires an area of ​​23, 965 hectares, i.е. part of the land plot that the entrepreneur has. But under different pretexts, the local executive body refused in any way to change the purpose.

The Business Ombudsman reported that this issue had already turned into a systemic problem. Therefore, he instructed the director of the Chamber of Entrepreneurs of Almaty region Lazzat Chinkisbaeva to meet with the akim of the region and to take appropriate measures.

Another issue that the Business Ombudsman voiced concerns the problems around the group of companies of JSC "Kazakstan kagazy". The lawyer of LLP "Kagazy Recycling" Marat Zhandosov told about the progress of litigation with state bodies.

The case began with an unscheduled inspection of the Investigative Department of the Ministry of Internal Affairs. This check was carried out within the framework of the Criminal Procedural Code of the Republic of Kazakhstan and the state agency issued prescriptions and an act of tax audit.

According to the representative of the company, order No. 3 of January 13, 2016 was issued illegally by the state agency, since the only document on the basis of which a tax audit could be appointed and conducted is the decision of the pre-trial investigation body agreed with the prosecutor.

"These and other procedural norms are violated by state bodies. We applied to the district and regional prosecutor's office, but neither the court nor the supervisory authority paid attention to the offenses committed by state bodies. Our company is the largest producer of container cardboard, corrugated packaging and paper in Kazakhstan and Central Asia. Litigation against companies has been going on for several years. At the regional level, we can’t solve the problem. We rely only on you", - he said.

Bolat Palymbetov noted that he would raise this issue before the Prosecutor General and provide all-round assistance to resolve the problem.

A representative of the First Brewery Company shared with the Business Ombudsman proposals to be introduced to a regulatory legal act regulating the production of alcoholic beverages.

In turn, the Business Ombudsman promised that these proposals will be studied and considered at the national level.

Concluding the reception of entrepreneurs Bolat Palymbetov once again called on entrepreneurs to be active and make suggestions for improving the business environment.