Bolat Palymbetov held a personal reception of entrepreneurs in Taldykorgan 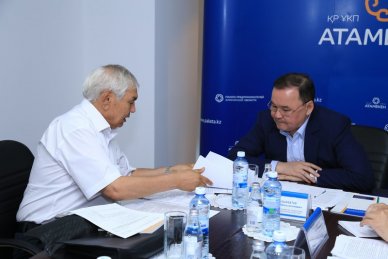 At a personal reception, a representative of LLP “MKS-Plus” Vyacheslav Borodin told the Business Ombudsman about the difficult situation with the akim of Taldykorgan and JSC “Kazakhtelecom”. At present, when rendering services to residents of Taldykorgan, the company has to coordinate its actions with Kazakhtelecom, ask for permission, to "get" consent for installation of their equipment (fiber optic cable), pay rent for the use of town cable ducts, etc.

Earlier, a meeting with representatives of state bodies was organized, the protocol decision of which was sent to the akim of the town for clarification on a number of issues. As it turned out, the balance-holder of communications networks in the town is the Department of Housing and Communal Services, Passenger Transport and Highways.

However, at present, the issue of putting underground mines on the balance of local executive bodies remains open, this procedure would allow holding tenders and on equal terms to provide mines to Internet service providers", - the entrepreneur explained.

The Business Ombudsman gave his legal assessment of the case, calling the situation ridiculous, as the akimat violated the court decision. Therefore, he instructed the Chamber of Entrepreneurs to hold a meeting with the akim of the town and to make clear all the points.

"And we will help for the second time!"

Yerzhan Kaldybekov for the second time signed up for a personal reception with the Commissioner. Thanks to the Business Ombudsman, a criminal case against an entrepreneur, lasting more than 3 years, ended in his favor. However, the entrepreneur faced a new problem. Earlier, in 2013, Kaldybekov purchased glass jars for honey in the Kyrgyz Republic (KR). He freely crossed the state border of the KR, the customs post "Karasu" in the Zhambyl region, received a transit declaration, and then left the post. If authorized state and law enforcement bodies detect smuggling, state bodies are obliged to conduct an investigation and take a procedural decision, as well as to remove the contraband goods and decision on it fate. Arrest goods on the spot.

"In the end it led to losses. The production of honey packaging has been suspended, contractual relations with the Kyrgyz side have been terminated. Every day, the cost of storage services in the temporary storage facility of Taldykorgan is growing", - the entrepreneur said.

Warehouse storage facilities for which the glass containers of SP “Kaldybekova E.K.” are located are refusing to issue goods, due to non-payment of debt for storage services of approximately 2.5 million tenge, which is about 21 times greater than the cost of the goods themselves. In turn, Bolat Palymbetov said that he will provide active assistance in resolving the case.

The Business Ombudsman named awful the fact of violation in the field of veterinary medicine in the Aksu district. According to Murat Ormanov, the head of "Nur meken" farm, during his absence, employees of the district veterinary service seized a blood sample and vaccinated animals from foot and mouth disease without special permission and the relevant documents. At that time, the specialists did not have any permits. In addition, in April this year, the same service without the relevant documents allegedly with suspicions of foot-and-mouth disease took 11 heads of cattle from the farm. After that, the owner did not see the animals.

"At the district level, my appeal remains unanswered. Recently I appealed to the regional prosecutor, who was also outraged by the actions of the veterinary service of the Aksu district. Now I address you and ask for your intervention. During this time, I was convinced that I can’t prove my rightness to the Veterinary service. Since, today we do not have independent laboratories", - Murat Ormanov said.

The Business Ombudsman said that the case requires immediate intervention.

"How can veterinary staff members without an entrepreneur's consent and licensing documents take tests, take away cattle?" We will raise this issue with the Agency for Civil Service and Anti-Corruption Affairs", - the Ombudsman concluded.

Also, during a personal reception, entrepreneurs voiced problems in the sphere of subsidizing, architecture and urban development.

In the frame of the working trip Bolat Palymbetov went to the Ili district, where in the village of Otegen batyr he held a reception of entrepreneurs.