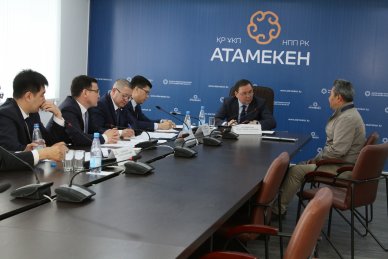 During the meeting the complaints of entrepreneurs about the actions of law enforcement agencies were discussed, as well as the problematic issues of initiating criminal cases by the Economic Investigation Service of the Department of Public Revenues (Karaganda Region).

Kairbek Suleimenov stressed the importance of mutual cooperation between the Chamber and law enforcement bodies not only at the republican level, but also in the localities and regions.

For the most part, the complaints concern the delays in the investigation of criminal cases, the actions of law enforcement officers and complaints against the actions of members of the local police service. As it turned out, a criminal case against an entrepreneur is initiated in five cities out of nine. It should be added that during the period from 2015 till today, the Chamber of Entrepreneurs of the Karaganda Oblast received 12 complaints against the bodies of internal affairs.

"The head of state has ordered to decriminalize economic crimes. In 2015, 80% of entrepreneurs were subjected to unreasonable criminal prosecution, and thus only 20% of them reached the courts. As a result of the huge work done jointly with the General Prosecutor's Office, the number of criminal cases on economic violations in the last two years has decreased five-fold - from 8,170 cases in 2015 to 1,618 cases in 2017. We need to clearly understand that when initiated case consludes without charges it damages a business incredibly. The business loses the credit line in his bank. Second, the business will not be able to participate in any state programs"- explains the business ombudsman Bolat Palymbetov. According to him, the initiation of a criminal case leads to bankruptcy of business.

"It is a fraudulent bankruptcy. Therefore, I ask you to act responsibly with regard to  this matter. I recall the words of one attorney general. When he imposed sanctions he was always thinking about two things. The first, damage to the entrepreneur and the second job losses"- says Bolat Palymbetov.

However, as participants of the meeting noted, today entrepreneurs might still face a threat of illegal bringing to criminal responsibility and as a result, the loss of their business. While business seeks openness and partnership from local executive bodies.

The meeting of the Council again raised the issue of the individual entrepreneur Madina Zhakupbekova, who won a tender for catering in the dining room in the Karaganda Academy of the Ministry of Internal Affairs of the Republic of Kazakhstan. However, in the implementation of full-fledged activities, business woman is hindered by the leadership of the Academy. It was previously announced to send a letter to the Presidential Administration on this occasion.

In addition to its permanent members, the work of the Council was attended by representatives of state bodies, industry associations and businesses in the region.

Within the framework of this trip, the Commissioner for the Protection of Entrepreneurs Rights of Kazakhstan also held personal meetings and heard all the problematic business appeals. In particular, businessmen were worried about land issues; inspections conducted by state bodies and their results, legislative and tax issues.