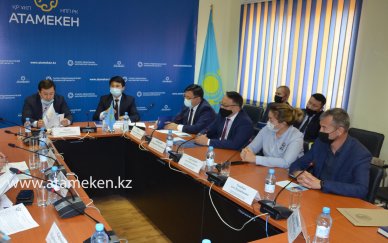 Business entities spoke about the problems that arise in the conduct of financial activities during a meeting organized at the Chamber of Entrepreneurs of the Atyrau region.

The event was attended by representatives of the regional prosecutor’s office, departments of state revenue, economic investigations, the Agency for Civil Service Affairs and Anti-Corruption, the Department of Entrepreneurship, a branch of the National Bank of the Republic of Kazakhstan.

Head of the Sector of the Ombudsman for the Protection of the Rights of Entrepreneurs of Kazakhstan for the Atyrau Region, Deputy Director of the Regional Chamber of Entrepreneurs, Sarsenbay Zholdybaev, noted that in the recent Address, the President of the country again paid increased attention to entrepreneurship issues, not only in a pandemic, but also with an eye to the future.

“In particular, the task has been set for comprehensive support from the state for small and medium-sized businesses. Particular emphasis is placed on the interaction between business and government agencies. Over the next year, a new regulatory and legal framework for SMEs should be developed. Any illegal interference of state structures in business activities, obstruction of the work of businessmen will be perceived as the gravest crime against the state, the head of state emphasized. In this regard, I want to note that the Chamber of Entrepreneurs and a number of state bodies have signed a Roadmap for interaction on entrepreneurship. If any controversial issues arise, business entities can contact us,” Sarsenbai Zholdybaev said.

The entrepreneurs who took part in the meeting voiced a number of problematic issues. In particular, representatives of the Association of Passenger Transportation of the city of Atyrau complained that they could not receive subsidies to cover the costs of passenger transportation. To find out the reasons, the department of the Agency for Civil Service Affairs and Anti-Corruption, together with the prosecutor’s office, will conduct an appropriate check.

And representatives of “Umirzak-Service” LLP complained that they could not receive payment from their counterparty for a long time. According to them, not only their enterprise suffered from the illegal actions of this company. The regional prosecutor's office also promised to consider this issue.

At the end of the meeting, representatives of the Department of the Agency for Civil Service Affairs and Anti-Corruption spoke about the Protecting Business and Investments project, the main goal of which is to increase the confidence of business and investors in government institutions. Within the framework of the project, the department undertakes to provide business entities with assistance in preventing illegal inspections and administrative barriers on the part of regulatory authorities.

Similar events are planned to be held periodically, as entrepreneurs contact and systemic problems are identified that are an administrative barrier in the development of regional business.