Tokayev: Trade-economic and investment cooperation between the USA and Kazakhstan significantly strengthened 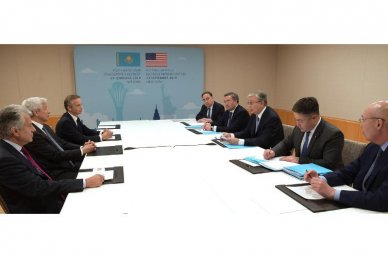 NEW-YORK. KAZINFORM – The first day of the visit of Kazakh President Kassym-Jomart Tokayev to New York ended with a roundtable meeting with the participants of major American companies, Kazinform reports citing the Akorda press service.

Addressing the meeting, Kassym-Jomart Tokayev congratulated the members of the Kazakhstan-U.S. Business Association on its 20th anniversary and expressed gratitude for the organization of the event.

President drew the participants’ attention to the fact that since the moment of signing the Joint Statement on the Kazakhstan-U.S Extended Partnership during Nursultan Nazarbayev’s visit to the U.S. in January last year, the trade-economic and investment cooperation between the two countries significantly strengthened.

He reminded that the U.S. had been one of the largest investors of Kazakhstan economy: the total volume of the U.S. investments in Kazakhstan exceeded $45bn. More than 500 U.S. companies are operating in Kazakhstan to date.

“In 2018, the volume of foreign direct investments to Kazakhstan reached a record-breaking indicator – $5.3bn. The volume of mutual trade increased twofold and comprised $2.8bn in 2018,” Kassym-Jomart Tokayev said.

Speaking on the economic potential of Kazakhstan, the President pointed out three major components of the country’s progress: favorable investment climate, development of the market and communications and human capital strengthening.

The Head of State informed the American partners of the work of the Government of Kazakhstan on the improvement of investment climate by ensuring the rule of law, inviolability of contracts and intellectual property protection.

The President touched upon the potential of Kazakhstan in energy, agriculture, finance, human capital, and the country’s transport and logistics opportunities.

“Kazakhstan is an important transport hub connecting the East and the West. More than 70% transcontinental routes run via the territory of Kazakhstan,” the President noted.

Upon completion, Kassym-Jomart Tokayev assured the representatives of the U.S. business communities that he, as a President, would exert every effort to expand the economic partnership between Kazakhstan and the U.S.

On the same day, the Head of State had meetings with the top officials of several large international companies.

At a meeting, the President discussed with CEO of Royal Dutch Shell Ben van Beurden the cooperation in the implementation of oil and gas projects.

He discussed with Chairman of the Board and CEO of JPMorgan Chase & Co Jamie Dimon the interaction with financial institutions.

The issues of implementation of investment projects in agriculture were debated at the meeting with President of Tyson Fresh Meats Steve Stouffer and President and CEO of Valmont Industries Stephen G. Kaniewski.

Prospects of cooperation in start-up projects were considered during the meeting with CEO and Founder of Plug`n Play Saeed Amidi and Managing Partner, Vice President of 500 Startups Bedy Yang.

At a meeting with Vice President of Amazon Web Services Michael Punke, the sides discussed the interaction in e-commerce.