How Asian countries changing the world The Western observers and media are talking a lot about Asia's future growth, bearing in mind the huge potential of the region. According to McKinsey experts, it is time to look at Asia in a new way - the future has come faster than expected, kursiv.kz reports.

McKinsey & Company has launched a project dedicated to the future of Asia. The study, conducted by the firm in partnership with the McKinsey Global Institute (hereinafter – MGI), looks at Asian economies, companies, and ecosystems to find out the prospects for Asia and what the global governments and business communities should expect from Asian economy blooming. Kursiv.kz offers to look at the main points from ‘Asia's future is now’. This paper provides an overview of Asia's role in four areas: trade flows, corporate ecosystem, technology, and consumption.

The MGI examined 23 sectoral value chains covering 43 countries and highlighted major shifts in the structure of world trade. Asia is at the heart of many of these changes.

Global output has continued to grow over the past decade, but the share of exports has fallen by 5.6 percentage points. This decline, McKinsey analysts say, is neither a consequence of trade disputes nor a signal of an impending slowdown. On the contrary, it reflects healthy economic growth in China, India and the rest of developing Asia. As consumption grows, more and more goods produced in these countries are sold on the local market rather than exported.

In the previous round of globalization, Western companies were building a half-world supply chain to take advantage of the cheapest labour force, and these supply chains often passed through Asia. But now everything is changing: only 18% of today's merchandise trade is export from low wage countries to high wage countries. This is a much smaller share than most people expect, and it is constantly shrinking, McKinsey analysts say. Export-intensive production for exports has been the main engine of China's growth, but the region's potential for the competition based on cheap labor is shrinking with rising wages and increasing automation of production.

Nevertheless, McKinsey notes, this window of opportunity is not yet closed - with rising wages in China, Vietnam, India, and Bangladesh have had a chance to increase exports of labor-intensive industrial goods (especially textiles) on an annual basis by 15, 8 and 7% respectively.

Asian corporations are on the rise

Asia's changing role in value chains reflects the rapid development of the region's corporate ecosystem. Many Asian companies are among the largest in the world. In the 2018 Fortune Global 500, 210 of the world's top 500 companies were Asian in terms of revenue. McKinsey analysts reviewed the situation with 5,000 of the world's largest companies. In 1997, Asia accounted for 36% of them, and by 2017 this share had increased to 43%. The most interesting thing is how the country ownership of Asian top-5,000 companies has changed. China has shown the highest growth in the number of such companies, and their number in India has also increased noticeably. Four of the top 5,000 companies are located in Kazakhstan, and their total revenue is $14 billion. The list now also includes the Philippines, Vietnam, and Bangladesh.

Over the past 20 years, the sectoral composition of Asian companies from the top 5,000 has also changed significantly - the industries producing the means of production now account for a much smaller share of the region's economy than in 1995-1997. Asian firms have become global market leaders not only in industry and the automotive industry but also in technology, finance, and logistics.

Another curious observation by McKinsey concerns, the difference in ownership structure, growth strategy and style of work of Asian giant corporations and Western transnational corporations. Approximately 2/3 of 110 Fortune 500 Chinese companies are state-owned. The top five chaebol companies in South Korea account for about half of the country's stock market capitalization. Remind that the chaebol is a unique scheme of business building, financial and industrial conglomerates, one of the main features of which is family continuity in management. Samsung, LG, Hyundai are chaebols.

The Japanese "big six" keiretsu also has a large weight in the stock market of the country. Keiretsu is a Japanese form of business organization, where companies are united into financial and industrial groups, where each company owns a small share in all other companies of the group. As a result of the Asian approach to management, a company with a controlling shareholder - whether it is a family, founder or state - can make long-term decisions on business development and distribute profits based on these goals. This is how many Asian firms differ from public companies that report to shareholders every quarter and are more focused on maximising profits soon.

Asia is shaping the future of digital innovation around the world

Today, half of the world's Internet users are located in Asia - 2.2 billion people. China and India alone account for one-third of all users of the World Wide Web. A huge pool of digital consumers in Asia supports the development of the innovative technologies sector. China, Japan, South Korea, and Singapore are among the most digitally advanced countries in the world, and China has entered these ranks at an astonishing rate. For example, 10 years ago, in e-commerce, China accounted for less than 1% of all global transactions in monetary terms, and now this share is more than 40%. The penetration rate of mobile payments among Chinese Internet users in 2013 was 25%, and in 2016 it was already 68%. Chinese Internet giants Baidu, Alibaba and Tencent are building a huge digital ecosystem that now extends beyond these companies.

Asia attracts enough venture capital to support technological innovation and entrepreneurship. China is now the second-largest country after the U.S. in terms of investment, and between 2014 and 2016, startups in the Celestial Empire received just under 20% of the world's venture capital. India is fast catching up - venture capital financing in 2018 was three times higher than in Germany. As a result, Asia now accounts for almost half of the world's venture capital investments, the main areas where this capital is directed - virtual reality, vehicles, 3D-printing, robotics, drones and artificial intelligence (AI).

Researchers at McKinsey are focusing on an interesting fact: now Asia is not only bringing a significant share of the world's unicorns to the market but is doing it very quickly. Analysts estimated how much time has passed on average between the establishment of a startup and its acquisition of the status of a unicorn. On average, it took 10 years for companies in Europe, the Middle East and Africa, 9 years for startups in North America, and only 6 years for companies from Asia.

Another distinctive feature of Asian startups is their ability to scale faster than their Western counterparts. Asian startups often focus on the B2C segment and choose industries that do not require intensive R&D, such as e-commerce or education and training services. B2B and R&D-intensive industries (such as analytics and productivity software, cloud computing and medical IT) are typically led by firms based in the United States, United Kingdom, and Germany. But at the same time, China has made AI development a strategic priority and is already considered one of the leaders in this area.

Asian consumers are the driver of the global economy

Over the past couple of decades, the number of people living in extreme poverty worldwide has declined dramatically. More than 1.2 billion people have become part of the consumer class, which means that they have moved from a minimum level of risk tolerance to a level of income that allows them to purchase goods and services.

According to McKinsey's forecasts, the Asian region will provide half of all consumption growth in the next 10 years. Growing Asian middle class will soon reach 3 billion. Only in South-East Asia, about 80 million families entered the consumer class just a few years ago. By 2030, this number will double to 163 million households.

For example, India's average spending on clothing and footwear increased from $40 per person in 2007 to $64 in 2017. The most striking increase in consumption occurred in China. A previous MGI study identified the Chinese working-age population as one of the key consumers in the world. By 2030, this group will account for 12 cents of every dollar of global urban consumption.

In 2018, about 30 million Chinese customers spent about a third of all luxury goods worldwide. According to McKinsey's forecasts, by 2025 Chinese buyers will spend almost twice as much on luxury goods.

"The Asian consumer is a customer who goes beyond the usual ideas of generations. For example, older people in the region will stimulate a 15% growth in global consumption, adding around $660 billion to the costs they incur today. The needs of older people go beyond health care. For example, many elderly people prefer to grow old at home and in comfortable conditions, so they start renovating.

The Asian generation Z has grown up in wealth, with greater openness to Western culture and digital knowledge. Young Chinese consumers buy luxury goods under the influence of the desire to be noticed. McKinsey analysts note that consumer markets in the region are experiencing not only tremendous growth but also dynamic changes - new consumers are quickly forming brand loyalty, waiting for personalized brand offers and want to express themselves, their approach to fashion and style through shopping. As companies strive to meet ever-growing expectations, Asian consumers will increasingly set trends for the rest of the world. 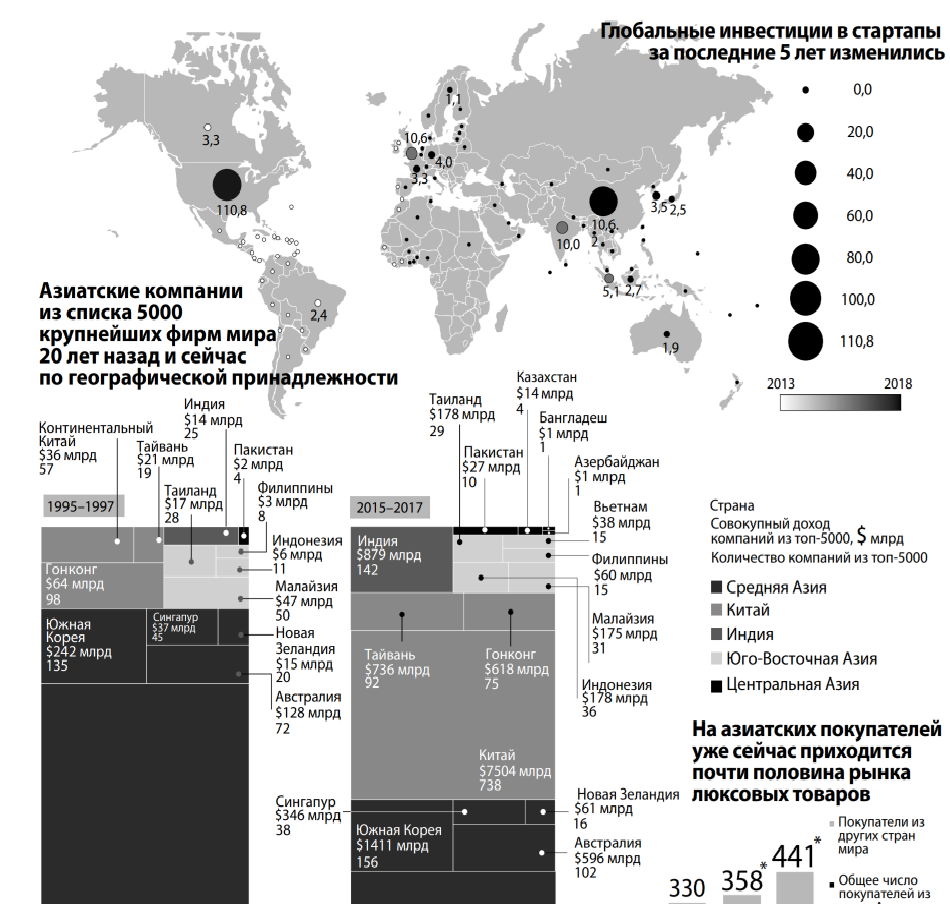